Fighting is continuing for the 24th day over Nagorno-Karabakh, despite a ceasefire being agreed in Moscow.

In an interview with France24, Armenian President Armen Sarkissian said that Turkey’s role in the conflict in Nagorno-Karabakh was ‘completely destructive’

Talking about Russia’s involvement in the conflict, Sarkissian stressed that ‘unlike Turkey’ Russia was not directly involved, but ‘became an impartial mediator’.

Sarkissian said that Russia should not intervene militarily, as he did not want the Caucasus to become ‘another Syria’ with the involvement of third parties.

He added that Armenians in Nagorno-Karabakh had ‘proven’ that they could defend themselves.

‘Instead of talking of involving Russia, we have to talk about excluding Turkey, which has a completely destructive role here. It is destabilising the whole issue. It has added a new dimension to this which has anything to do with the aspirations of the people of Nagorno-Karabakh, or the Republic of Artsakh, to live in their homeland freely’, he said.

He blamed Azerbaijan for starting the war and breaking the two ceasefires mediated by Russia since.

He said that Azerbaijan’s interests were not ‘in harmony with stopping the war’ and ‘going back to negotiations and solving the issue with peaceful means’.

‘Most probably, Turkey has completely other plans, ideas, and that’s why the Turkish presence component there is not allowing Azerbaijan to go on with the ceasefire’, he said.

He said he was expecting the UN Security Council and NATO to pressure Turkey and Azerbaijan to start a ceasefire. Once a ceasefire was reached, it would be possible to hold negotiations, and most importantly, negotiations on the final status of Nagorno-Karabakh, he concluded.

Dmitry Peskov, the Press Secretary of the Russian President, has said that work is continuing on settling the conflict.

‘Work continues, in general, to stop military clashes and move the settlement process into a political and diplomatic channel,’ TASS quoted Peskov as saying.

Azerbaijani President Ilham Aliyev, in an address to the nation, has claimed that the Azerbaijani Army has taken control of 24 new settlements, including the city of Zangilan (Kovsakan).

Zangilan lies just nine kilometres from the Armenian border in the South of Nagorno-Karabakh.

Other villages claimed include several around Fuzuli (Varanda) and to the north of Jabrayil (Jrakan) and Hadrut. 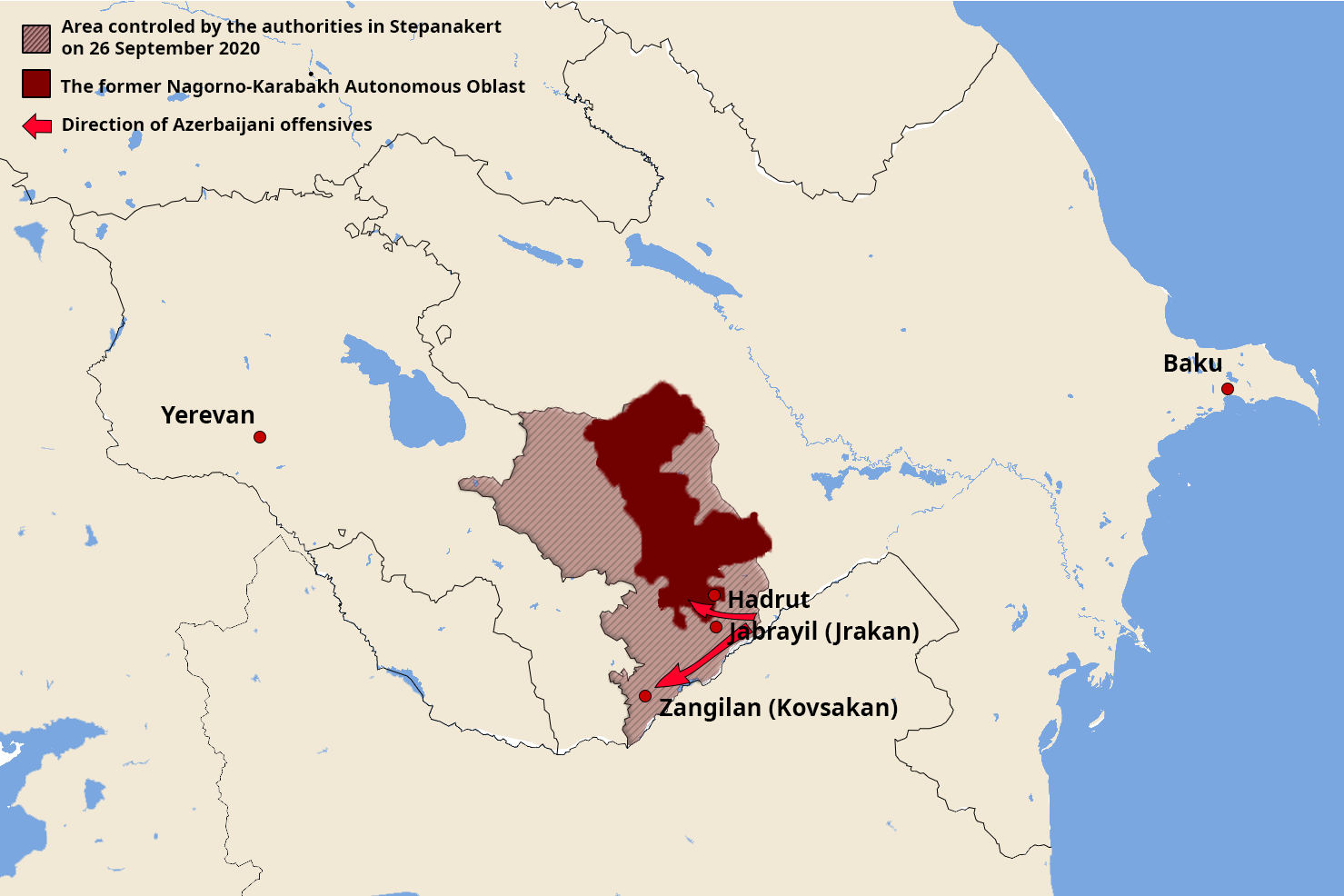 Armenian Defence Ministry spokesperson Shushan Stepanyan claimed on the contrary that Azerbaijani forces were retreating in the South.

‘The enemy retreats in the southern direction, Khudaferin Reservoir, suffering heavy losses. We warned about entering the hell’, Stepanyan tweeted.

The enemy retreats in the southern direction, Khudaferin Reservoir, suffering heavy losses. We warned about entering the hell.

The foreign ministers of Azerbaijan and Armenia are scheduled to meet separately with US Secretary of State Mike Pompeo in Washington on Friday, Politico reports.

Politico, who claimed to have seen State Department documents confirming the visits, said it was unclear if the two foreign ministers would meet each other.

The UN Security Council has called on Armenia and Azerbaijan to respect the ceasefire agreement that was supposed to start from 00:00 on 18 October, France 24 reports.

During the meeting, the Security Council’s 15 members reportedly reiterated the plea of UN Secretary General Antonio Guterres for the sides to respect the ceasefire.

A statement is expected to be agreed between Council’s members this week which would call on Armenia and Azerbaijan to resume negotiations under the OSCE Minsk Group.

Russia’s UN Representative, Vasily Nebenzya, told RIA Novosti that the Security Council also discussed what body could monitor the observance of the ceasefire and how.

‘The UN would require a mandate from the Security Council, this is not an easy or quick thing. The OSCE plays a major role in the settlement […] Who will be there and in what capacity, who will be in control — this is still a question. It is being discussed. How it will be implemented in practice is another matter’, he said.

Azerbaijan’s Ministry of Defence has stated that battles continued overnight in the north and south of Nagorno-Karabakh.

Shushan Stepanyan, a spokesperson for Armenian Ministry of Defence, said that Azerbaijani Forces used aviation and artillery in the northern frontline. She also added that ‘intensive fierce battles in the southern sector continue’.