Fighting is continuing for the 29th day over Nagorno-Karabakh, despite a ceasefire being agreed in Moscow.

The OSCE Minsk Group has announced that the Armenian and Azerbaijani foreign ministers, Zohrab Mnatsakanyan and Jeyhun Bayramov, will meet in Geneva on 29 October. They will be joined by the Minsk Group co-chairs, the US, France and Russia.

The Minsk Group is responsible for mediating the Nagorno-Karabakh conflict.

The announcement follows a trip by the two foreign ministers to Washington today where they met with US Secretary of State Mike Pompeo as well as the Minsk Group co-chairs.

According to the statement, the meeting will be aimed ‘to discuss, reach agreement on, and begin implementation, in accordance with a timeline to be agreed upon, of all steps necessary to achieve a peaceful settlement of the Nagorno-Karabakh conflict in accordance with the basic principles accepted by the leaders of Azerbaijan and Armenia’.

Azerbaijani President Ilham Aliyev has announced that Azerbaijan has taken control of several villages in the Zangilan (Kovsakan), Jabrayil (Jrakan) and Gubadli (Kashunik) districts as well as ‘part of’ Kalbajar (Karvanchar) district.

He also said that the city of Gubadli itself came under Azerbaijani control.

Armenia and Azerbaijan have agreed to a humanitarian ceasefire starting at 08:00 tomorrow morning. The ceasefire was announced in a joint statement by the two countries and the United States. The Armenian and Azerbaijani foreign ministers are currently in Washington where they met with US Secretary of State Mike Pompeo. 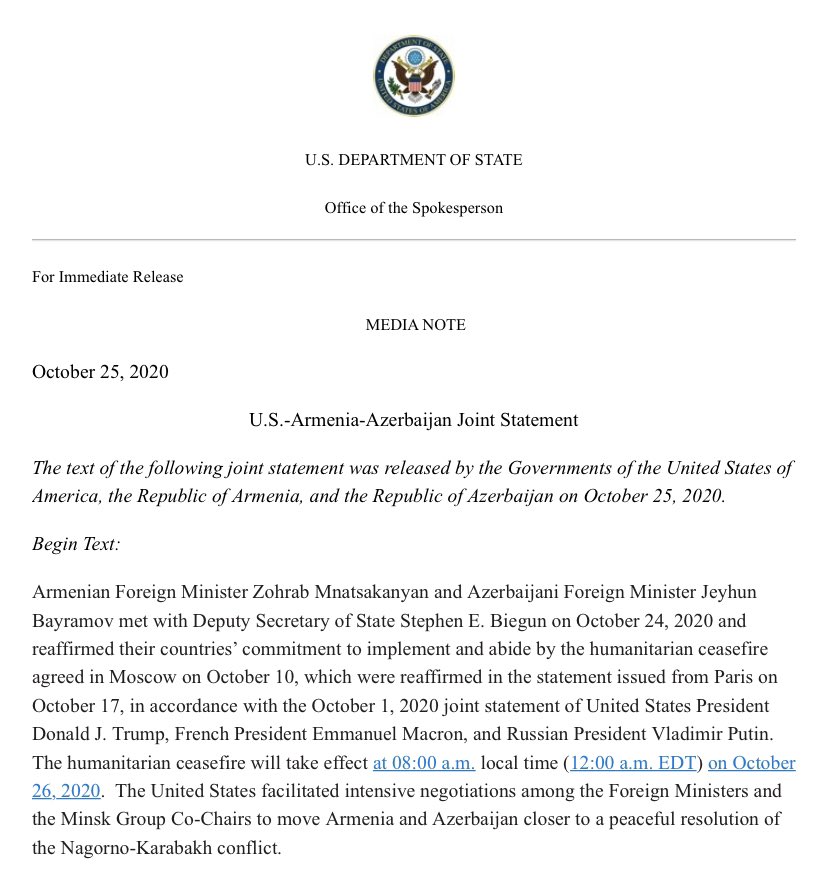 Two previous attempts to establish humanitarian ceasefires, on 10 and 17 October, broke down within minutes of coming into force.

There have been numerous reports in recent days of Russian troops setting up positions along Armenia’s border with Nagorno-Karabakh in Syunik Province.

One photo by TASS photographer Sergei Bobylev shows a field camp on 23 October near the village of Tegh, close to the strategically important Lachin (Berdzor) pass. In recent days, Azerbaijani forces have made advances towards the pass, over which the main road connecting Nagorno-Karabakh with Armenia lies. 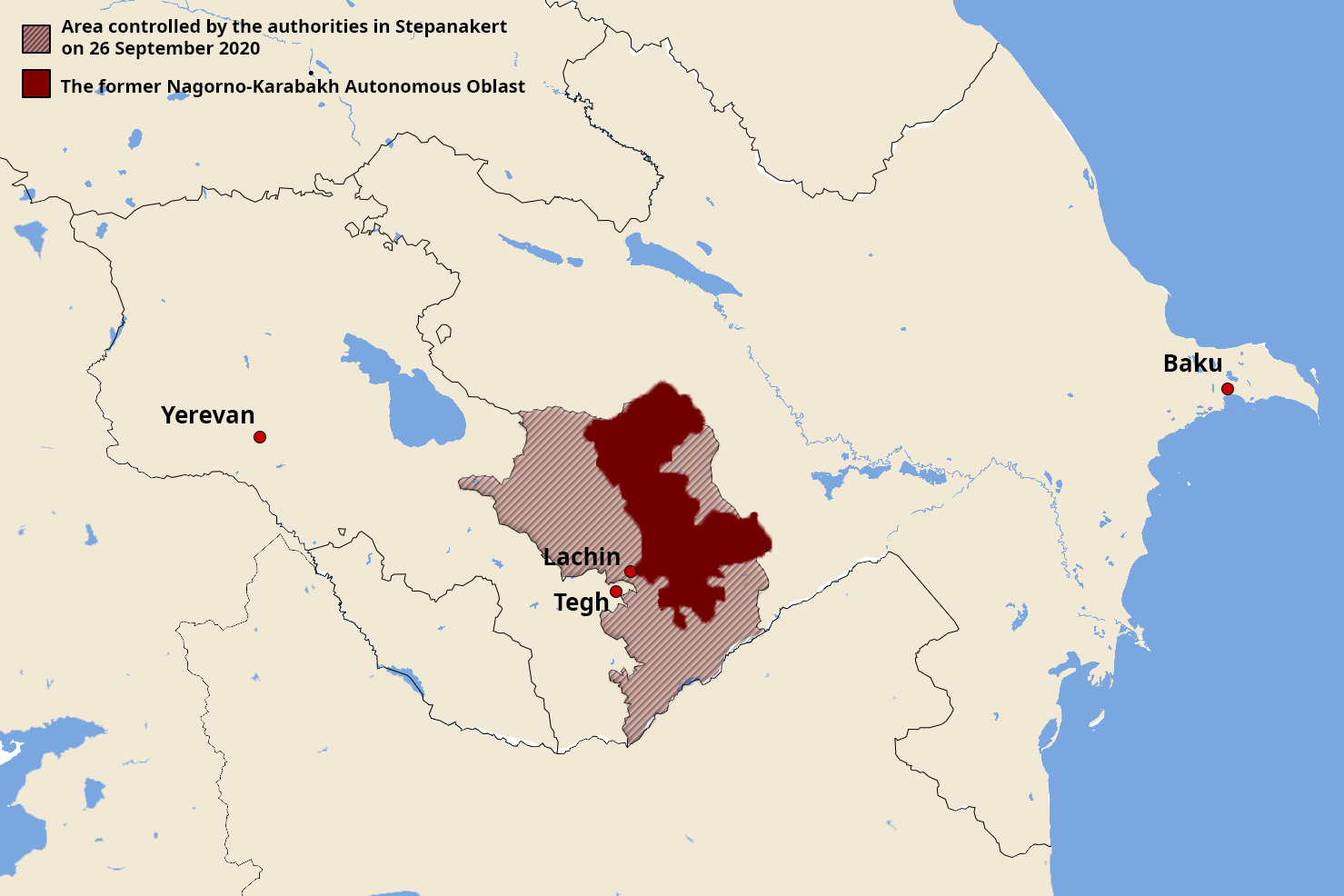 Russia is obliged to protect Armenia from attack under the Collective Security Treaty Organisation.

Units of the Iranian Islamic Revolutionary Guard Corps have deployed to Jolfa and Khoda Afarin on Iran’s northern border in response to the fighting in Nagorno-Karabakh. 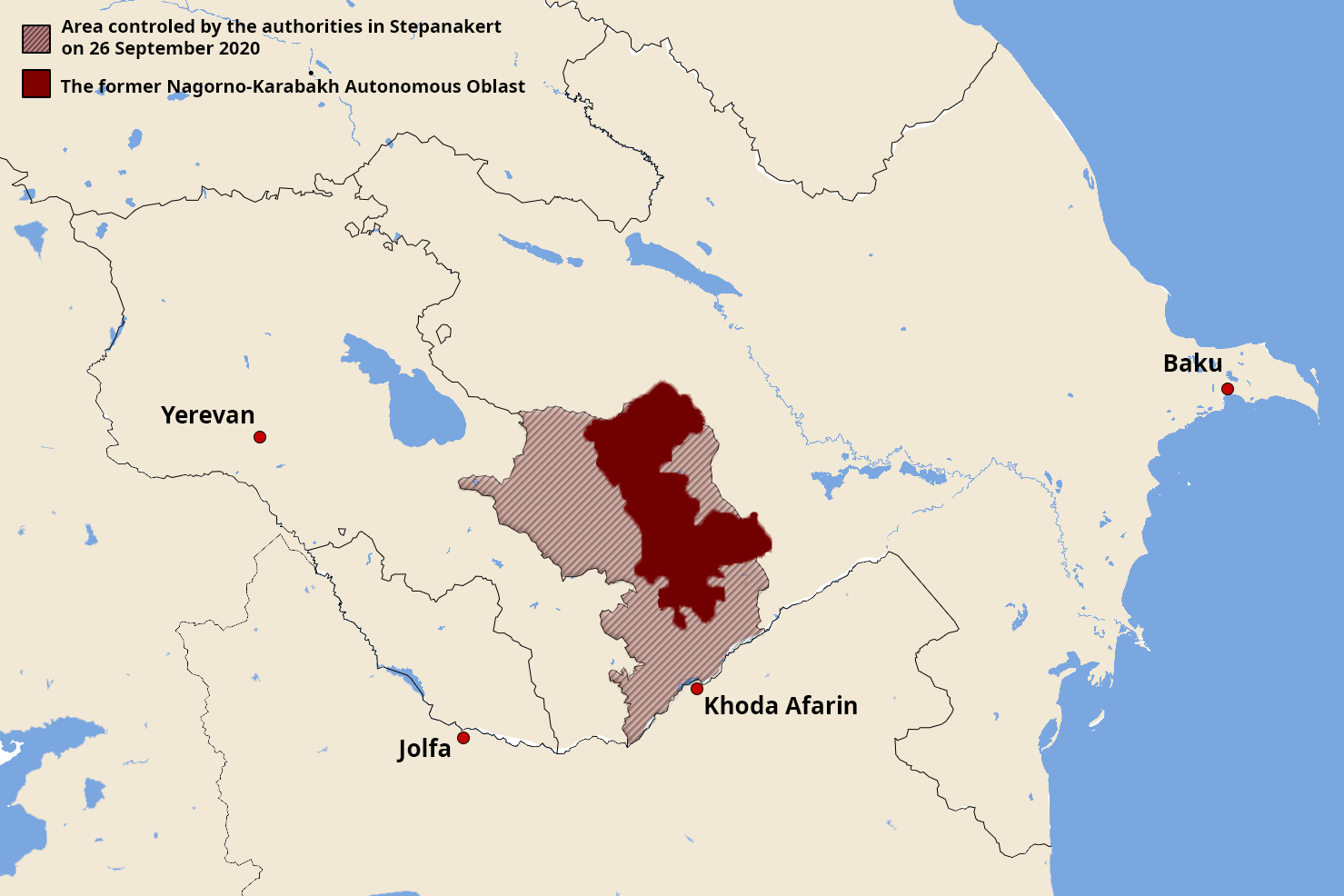 The chair of the US House of Representatives Intelligence Committee, Adam Schiff, has called for the US to recognise Nagorno-Karabakh as an independent state.

I am formally calling for U.S. recognition of the Independent Republic of Artsakh.

The United States will not stand idly by as Azerbaijan and Turkey wage war on Artsakh, killing hundreds of soldiers and civilians, and displacing tens of thousands.

I stand with Artsakh. pic.twitter.com/cPzMjNoMeF

‘With bombs, and drones, and Syrian mercenaries, Turkey and Azerbaijan are pushing ahead with a war that has no end in sight’, he said.

‘If they persist in this violence, we must recognise the Republic of Artsakh as an independent nation. Doing so would send the strongest possible message that we will not allow border disputes to be settled by the indiscriminate and devastating use of force against civilian populations.’

‘Aliyev and Erdogan must be made to understand that if they continue with this war, there will be consequences. The United States will not stand idly by.’

He was one of the co-sponsors of a resolution recognising the Armenian Genocide in October 2019.

The US Embassy in Baku has released a security alert for US Citizens in Azerbaijan warning of ‘credible reports’ that terrorist attacks were being planned in Baku.

‘The US Embassy in Baku has received credible reports of potential terrorist attacks and kidnappings against US citizens and foreign nationals in Baku, including against hotels such as the JW Marriott Absheron, as well as potentially other locations in Baku.’

Nagorno-Karabakh’s foreign ministry has appealed to the Red Cross over the publication by Azerbaijan of videos of prisoners of war.

Both sides have said that fighting is continuing today along the entire length of the front.

The Nagorno-Karabakh army has said that several settlements came under bombardment overnight.